Art by Sarah Rodriguez find more of her artwork at:

A recent poll shows that Trump could win if only men voted in the upcoming election. This has sparked a flame with certain Trump supporters concerning women’s ability to vote. I am aware the commotion for this hashtag has died down a little. However, we should not treat this as something just passing by in the media. Certain people believe it is okay to take away someone’s right to choose the leader of our country. After having heated discussions with certain people, I have realize the senseless arguments supporters use to attempt to quiet those who have issues with this hashtag. Do not be silent, be strong and stand up for your right to vote.

Here is a link to the article about the pole:

This argument is not civil towards women. There is a small percentage of people who believe it is okay for women to lose their right to vote and teach their children this pre- 1920’s mentality. They will instill in their sons that it is acceptable to treat women with disrespect and claim women do not need a voice, and teach their daughters that they are not allowed to speak up for what they believe in. This is disrespectful to not only women, but the women who fought hard for Women’s Suffrage.

The great thing about America is we have freedom of speech (such as how I am presenting my views about this hashtag.) This gives us power to our words and in beliefs, but to quote Spiderman “with great power comes great responsibility.” These Trump supporters are allowed to have a voice about their sexist opinion even if we disagree with their beliefs, and like mentioned before these people will teach their children that it is okay to take away a woman’s voice, and slowly that lesson will spread like an infection. These people might not have the power to actually appeal the 19th amendment; however, they do have the power to teach their children to respect others and see that everyone is equal no matter race, gender, or sexual orientation. Their voice gives them the power to spread hate and keep the country as divided labels and not one human race.

First, Trump can do this without the media’s aid, and yes I will admit media can mess with someone’s image. However, one needs to take a look at Trump’s track record: how he treats women, what he said about his daughter, and how many times he has been bankrupt. He does not need the media to screw up his image. He is achieving this on his own.

Second, no one is talking about it? Dose one not understand what a top trending hashtag means? It means that so many people are typing this hashtag on twitter that it is in the top twenty conversation. What is the definition of a conversation? Oh right two or more people talking to one another. Here is a picture of what people ae saying in their tweets. Mind you this is only a sectioned off picture of certain tweets. I am aware that there are people speaking against the hashtag. 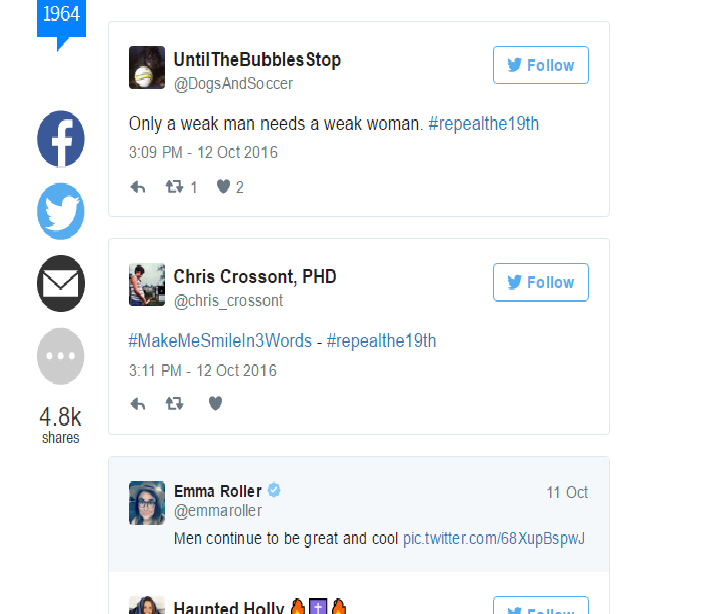 Picture of tweets from this article:

Some of these women do not understand that taking away their right to vote removes their chance to vote for Trump; therefore, their vote does not go towards their electoral college for their state. I am not saying vote for Trump. I am saying this is hypocrisy at its finest.

I will nor not should any women ever ignore the fact that someone wants to take their rights away. How would a man like it if we revoked their right to vote? Men never needed to write an amendment for themselves in order to vote because they already obtained the right to vote from the birth of our country. Go ahead call me a fem-nazi, but a common misconception about feminism is we women must rise above men and become the superior gender. No, that is idiotic. Feminism is about equality: the right for both genders to vote, the right for both genders to have equal pay, the right for women to obtain any job they wish, the right to not be sexually harassed or assaulted because we might be dressed a certain way or we are walking alone at night. Ignoring something like this is accepting that sexism will always exists in our country and there is no room for change. Let us not accept this 1920s mind set these backwards individuals are trending.

Please have an open discussion in the comments, but please show respect. Calling someone an idiot does not further prove your argument.